Arthur H. Cole Prize for the best article in The Journal of Economic History goes to our co-director Chicheng Ma 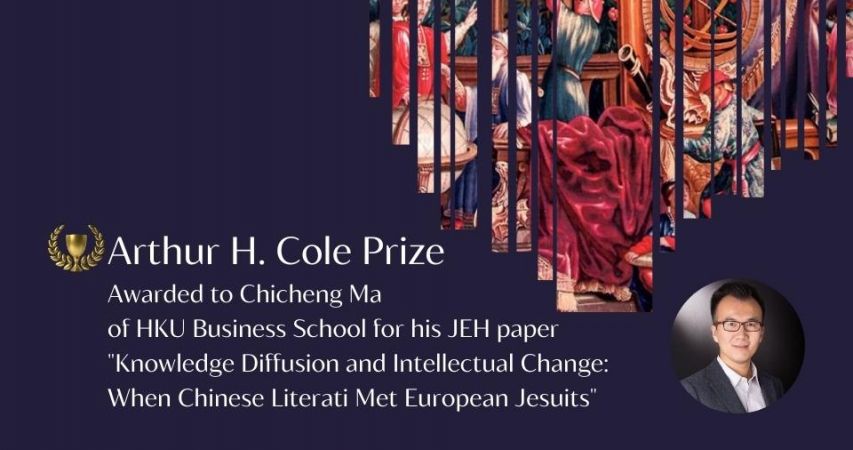 Co-director Dr. Chicheng Ma has recently won the prestigious Arthur H. Cole Prize for his paper "Knowledge Diffusion and Intellectual Change: When Chinese Literati Met European Jesuits" published in The Journal of Economic History (JEH). The prize was awarded at the annual meeting of the Economic History Association, held in La Crosse, Wisconsin, September 16-18, 2022. Chicheng Ma's JEH paper, which appeared in the December 2021 issue, can be accessed here: https://www.cambridge.org/core/journals/journal-of-economic-history/article/abs/knowledge-diffusion-and-intellectual-change-when-chinese-literati-met-european-jesuits/2313DD04962562256C2CDF6DEBE9FF7B

The award-winning paper is best summarized in his self-penned article published in LSE Business Review. The article is reposted here with his permission:

The conventional view that attributes China’s scientific stagnation to Confucian literati’s lack of interest couldn’t be farther from the truth. In a quantitative historical study, Chicheng Ma reveals a different picture. In 1582 the Jesuits arrived in China and won over the Confucian elites with astronomy and mathematics. Chinese scientific publications exploded. The problem came later, when the Jesuits were not welcome in China anymore. The stagnation may be related to the autarkic principle of Ming-Qing China.

How does knowledge exchange affect innovation? The Jesuit mission to China in the late 16th century provides a unique ‘experiment’ on it. At the time, China in the Ming dynasty had remained autarkic for two centuries. The autarky was embodied in not only the ban of foreign trade but also the self-contained academia. Steeped in a Confucian scholasticism and the associated civil examination system, Chinese intelligentsia was dominated by an elite of the literati, who devoted themselves to the study of the classics and, as conventional wisdom suggests, lacked interest in sciences and innovation. Accordingly, Chinese science, despite its early success in the Tang and Song dynasties, had stagnated by the 16th century.

Thanks to the Jesuits, European sciences were introduced to China. By virtue of distinct entrepreneurship and missionary enthusiasm, the Jesuits entered China in 1582 and successfully expanded their missions to one third of the Chinese domain by 1700. To preach in a totally different but powerful Confucian culture, the Jesuits adopted a unique missionary strategy of ‘elite with science’. Specifically, they introduced novel European sciences to win over the Confucian elites. After the early Jesuit pioneers found that it was science rather than Catholicism that made them popular in the elite circle, science became the principal instrument of the Jesuits’ mission in China.

By 1700, the Jesuits had translated over 130 European scientific titles into Chinese, in which astronomy and mathematics dominated. These included Tycho’s calendar, Galileo’s telescope, Clavius’ geometry, and various scientific instruments and inventions ranging from mechanical clocks, cannons, and the thermometer, to celestial observatory. This opened a window of new learning for the Celestial Empire; no wonder this period was depicted by historians as the great encounter of the two civilizations.

Then, what was the response of the Confucian intelligentsia? Did they depreciate science and Western learning as conventional wisdom suggests? I quantitatively assess the impact of this wave of intellectual contact on Chinese scientific production (see Ma 2021). Drawing upon the biographies of the 433 Jesuit missionaries in China collected by Joseph Dehergne, I identified the time and place of each Jesuit across 254 Chinese prefectures between 1580 and 1780. I measure the diffusion of European science using the distribution of the ‘Jesuit scientists’, i.e., those who introduced European sciences to China. Then I compare the prefectures with ‘Jesuit scientists’ to the prefectures with only ‘Jesuit priests’ (who preached but did not diffuse sciences) in terms of Chinese scientific production. Chinese scientific production is measured by the number of book titles on sciences written by Chinese scholars.

Statistical analyses indicate that the Jesuits stimulated Chinese scholars’ scientific research. On average, the increase in the number of Chinese scientific works in prefectures with Jesuit scientists is four times greater than that in prefectures without Jesuit scientists. Moreover, the number of Chinese scientific works increased with the number (and duration) of the Jesuit scientists in a prefecture. Chinese scholars’ new scientific achievement was stimulated by the European science; they benefited from the communication and collaboration with the Jesuits, adopting the European methods to revisit Chinese mathematics and astronomy, correct the calendar, and develop cartography. Many literati even began to criticize the metaphysical nature of Confucian classics and initiated a movement of “concrete studies”.

However, this wave of intellectual contact was not sustained after 1723. This year, the Qing emperor Yongzheng ordered the Decree of Suppression that forbade the Chinese from accepting Christianity; the imperial authority began to expel the Jesuits. The main reason behind the suppression was the Chinese Rites Controversy, in which the Qing emperors could not tolerate the Popes’ decrees that required Chinese Catholics to abandon their Confucian rites of ancestor worship. After 1723, the Jesuits gradually retreated from China; they finally ended the China mission after the dissolution of the Jesuit order by the Pope in 1773.

The expulsion closed the window of Western learning in China. China’s learned elites missed out the new and more revolutionary advance in science and technology in the Newtonian century. As a result, not only did the number of Chinese scientific works shrink, but the literati also gradually absorbed the Jesuit science into the system of Confucian classics. China’s scientific revolution, if any, had to wait until a century later, when the Qing dynasty was defeated by — and forced to open up to — Western powers in the second half of the 19th century.

Anyway, the Chinese literati’s positive response to the Jesuit science indicates the importance of knowledge exchange in scientific development and innovation. This also illuminates the Needham Puzzle: why did China, despite its early success in science, have no scientific revolution as Europe did in the 16th to 18th centuries? This quantitative historical study reveals a different picture from the conventional view that attributes China’s scientific stagnation to Confucian literati’s lack of interest. Instead, the stagnation may be related to the autarkic principle of Ming-Qing China.

The International Society for Quantitative History (ISFQH) is an independent, not-for-profit organization dedicated to promoting, supporting, and enhancing the advancement of education, in particular research and knowledge dissemination in quantitative history, in Hong Kong and other parts of the world.